Ujian Nasional and School-Sanctioned Cheating: Beyond the Moral Outcry 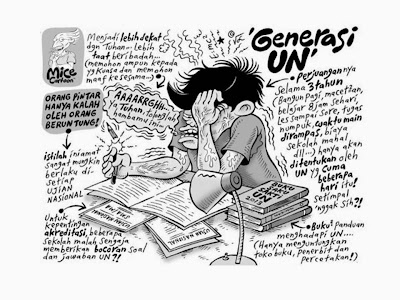 Remember Ny. Siami? In this age of information avalanche, the school-sanctioned cheatings that made national news several weeks ago have receded into the distant past.

Ny. Siami is the brave whistle-blower in one of these cases, where her son, a high achieving student in a public elementary school in Surabaya, was told by teachers to “share” answers with his classmates. This case has garnered widespread attention, mainly because it opened a new, disturbing dimension: that many parents seemed to not only tacitly tolerate, but openly support cheating as a way to pass the Ujian Nasional.

Most of the reporting and commentary has portrayed this case as a moral issue, an issue of honesty versus dishonesty. But this overlooks another, more important issue: educational (in)equity. This is an issue that has more to do with social structure and the educational system, than with particular individual’s morality, or lack thereof.

It is easy to understand why the case in Surabaya is viewed almost exclusively from a moral lens. The almost violent hostility of many parents towards Ny. Siami was shocking and prompted a moral outcry. There is also a compelling narrative of good, embodied by Ny. Siami and her son, versus evil, embodied by the perpetrating teacher(s) and parents. This is a narrative that fits well with the social agenda of fighting corruption in the wider community.

However, it is all too easy for middle/upper-class people (from whom, I suspect, most of the outcry has come) to assume the higher moral ground. The middle-class, myself included, tends to see educational achievement mainly as a matter of individual will, effort, and ability. Lazy students deserve low marks, while the diligent ones should be rewarded with higher marks. Teachers should strive to help their students pass exams through motivation and instruction.

But there is strong evidence that show academic achievement is also influenced by where one sits in the socio-economic hierarchy. Two students may have similar academic ability and motivation, but if they come from families with different socio-economic levels, then the poor student will be less likely to excel at school.

There are several explanations to this. The more obvious one is simply that students from poor families face more economic pressure and hence have less time and resources to study at home. The less obvious explanation is that students from poorer families hear, read about, and use far fewer academic vocabularies. They also don’t have much opportunity to engage in important cognitive skills, such as offering criticisms, considering multiple perspectives, and evaluating evidence. Consequently, teachers and schools that cater for poorer communities also face a much harder task of teaching.

And herein lies the issue of equity: students from low socio-economic families are far more likely to obtain low scores in, and risk failing, the Ujian Nasional. This becomes more problematic because the educational system and society at larger currently places too much premium on standardized scores.

Parents and other stakeholders are rarely, if ever, provided with narrative and specific descriptions of students’ progress in specific content areas. Achievements in sport, arts, or various hobbies are considered to be “extracurricular” or outside of the academic domain. Exam scores are virtually the only indicator of academic achievement that matters. Hence, even if graduation is not determined solely by the Ujian Nasional, it nevertheless imposes considerable stress, especially for poorer students and their parents and teachers.

This should help us understand why some teachers in lower income schools are tempted to organise mass-cheatings, and why some parents in the Surabaya case became so hostile towards Ny. Siami. These parents have few ideas on how to help their children excel academically. For them, cheating may have been perceived as the safest, and perhaps only way to guarantee that their children passed the high-stakes exam. And they are probably well aware that failing at school can deny their children the chance of climbing the socio-economic ladder.

Faced with the option of risking your child's future and endorsing cheating, would you take the higher moral ground? I don't know if I would.

Of course, at one level, cases of school-sanctioned cheating need to be dealt with as a moral issue. Understanding why people cheat does not mean permitting it. The perpetrators need to be punished, while Ny. Siami and other whistle-blowers who have sought to uphold honesty need to be protected and rewarded.

And the administration of the Ujian Nasional should be made more “cheat-proof”. But seeing school-sanctioned cheating exclusively from a moral lens focuses attention on individuals (“para oknum”, as we often call them). As if the problem lies in unique cases moral corruption, and hence can be addressed simply by punishing or educating those individuals. This avoids the more difficult task of addressing educational inequity.

With regards to the current cases of school-sanctioned cheating, the question is: how can we reform the Ujian Nasional system so that it can become an instrument of learning, rather than a motivator for cheating?
Posted by Anindito (Nino) Aditomo at 4:02 PM No comments: